Memories in the Strangest Places 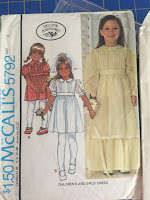 Now days with a good camera in every cell phone, snapping a photo to capture a memory that will become precious and knowing the light is just right is common. But when my children were growing up there were twelve, twenty-four or thirty-six shots to a roll of film and each roll had to be sent away to be developed. It's no wonder that a lot of years the photographs were of Christmas around the tree, a birthday, graduation, Now, we can be more spontaneous. 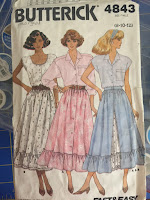 I realized yesterday that I do have something tangible that triggers memories.Through so many moves, I've culled my collection of sewing patterns to a fraction of what it was when I was sewing for the entire family. This little girl's dress was my daughter's flower girl dress when I re-married. She was certain that our wedding--hers, mine and Greg's--would be the first day of our happily ever-after. I still have the blue dress.

The next pattern was one I made a few times for her, but the most vivid  memory was of a bold blue floral fabric on a black background and eyelet lace petticoat, also with a ruffle. The idea was to leave the bottom buttons of the skirt unbuttoned showing the petticoat ruffle. She was in high school at the time and what I didn't realize was that such a frock--much as she loved it--drew jeers and criticism from her peers. Not knowing this at first, I was deeply hurt that she'd loved the fabric and pattern and asked me to make it for her, but rarely wore it. Communication wasn't always our strong point back then. When she realized this, she wore it to church and around the house in the evenings. But until that bit of communication, I suffered unnecessary pain. 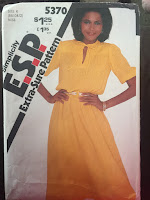 It's natural to want to remember the good times and to want to leave reminders for ourselves to remember lessons learned years later. That's why I underline passages in my Bible. It's good to look back and remember. When the Lord brought the Israelites across the Red Sea, God told them to have each of the leaders of each of the twelve tribes to bring a large stone and pile them up so that when their sons asked the meaning, they'd remember the story of their deliverance. That's what this final pattern, here, is for me. I made for myself back in 1982, to wear during a Women's Aglow ladies conference. It was a joyous time. After years of struggle, I'd come to a place where I was happy with myself and my life. The Lord had healed many of my emotional scars and I was excited to move forward. Now I look back and marvel that I survived, as many if not most, of my problems were self-inflicted through either ignorance or self-delusion.

I have few photographs of that time, but I still have mementos that evoke memories. Memories that remind me of the greatness and mercy of God.
at April 21, 2018 No comments: