I am thrilled at the wonderful reviews my new book is getting. The latest is by Romantic Times, one of THE voices of what's new and great in Romantic fiction. They gave No Greater Gift four stars out of a possible four and a half.

Remember, the release date is May 1. It's now available to pre-order as an e-book on Amazon. On May 1, you'll be able to order it, there, in paperback.

When you search for it on Amazon, make sure you search for Teresa H. Morgan. The H is important. Here's a link: http://www.amazon.com/s/ref=nb_sb_noss?url=search-alias%3Daps&field-keywords=Teresa+H.+Morgan

Here's the review and summary:


"A fast-paced family saga, this book transports readers between the current era and World War II. Characters are well-rounded, each with their strengths and weaknesses, which is refreshing. Morgan did her research on World War II, but it doesn't overwhelm the plot." -- Romantic Times
Summary:
Grace Ryan has returned to her hometown expecting to help her grandmother turn her journals and her memories of WWII into memoirs, but instead finds herself at the hospital bedside of her grandmother, who begs Grace to dig into a decades-old crime of treason that could rip her family apart. Physicist Erik Petersson has suffered through a nasty divorce and the loss of his children and their love, and he agrees to help Grace decipher her grandfather’s scientific papers while on sabbatical. When Grace’s life is threatened by someone they both know, they realize they are very close to uncovering the truth.
at April 20, 2016 3 comments:

In 2009 magician Penn Jillette, an avowed atheist, spoke of his conversation with a Christian businessman. "And he was truly complimentary. It didn't seem like empty flattery. He was really kind and nice and sane and looked me in the eyes and talked to me and then gave me this Bible."

Then Mr. Jillette made a surprising statement:

"How much do you have to hate somebody to believe that everlasting life is possible and not tell them that? If I believed beyond a shadow of a doubt that a truck was coming at you and you didn't believe it, and that truck was bearing down on you, there's a certain point where I tackle you. And this is more important than that...Now I know there's no God, and one polite person living his life right doesn't change that. But I'll tell you, he was a very, very, very good man, and that's really important. And with that kind of goodness, it's OK to have that deep of a disagreement."

The "problem" with the Christian worldview is that it deals in absolutes. But, don't most religions? Certainly Muslim faith does. Few people would say, in effect, “The law of gravity may work for you, but it puts limitations on me that I don't like. It doesn't work for me, so I'll ignore it.” Whether or not we choose to acknowledge gravity’s authority over us, we’re still subject to it. Sounds silly, right? The principle is the same.

Reality doesn't change because we cannot see Jesus sitting on His throne at the right hand of the Father. Some say that Jesus was a good teacher, but not the Son of God, the Creator of all. But Jesus said, “No one comes to the Father except by Me.” If He is not the Son of God and, as He claims, the only way to the Father, then He was either insane, deluded or a liar.

Society today seems believe that if we do good things, refrain from any gross sin, we'll go to heaven. God is love, after all. Scripture says so. Could a God of love send people to hell? Or so goes the argument.

Ah, but He must. God isn’t only love. He is also absolute holiness. When Adam and Eve sinned, God had to banish them from the garden. God certainly took no pleasure in it, but it was a necessary, and temporary, separation. God cannot have fellowship with anyone or thing less than holy. His heart is also one of deep abiding love, and He would not abandon mankind. That’s why Jesus came to die. To pay the legal price for our sin.

1 Cor 1:18 For the message of the cross is foolishness to those who are perishing, but to us who are being saved it is the power of God.
at February 18, 2016 No comments: 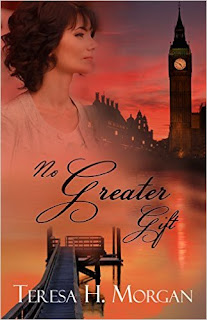 I am thrilled to announce that my newest book, No Greater Gift, will be published by Mountain Brook Ink on  May 1, 2016.

History professor Grace Ryan returns to her hometown expecting to help her grandmother turn her journals and memories of WWII into memoirs. She arrives to find her grandmother being loaded into an ambulance. When she begs Grace to find the truth about a decades-old crime, whispers the word treason, then slips away forever, Grace is left to separate fact from fiction. Then, an unwelcome inheritance strikes at her already fragile family bond. Though God’s voice seems silent, He sends someone to stand in the gap for her.


Erik Petersson, unjustly accused of infidelity, suffered through an unwanted divorce and the loss of his children’s love to his former wife’s bitterness. A physicist on sabbatical, he agrees to help Grace dig through her late grandfather’s scientific papers. As he struggles to win back his children’s love, he and Grace are catapulted into a quagmire of truth and lies that could tear her family apart.


The preorder price is an amazing $3.49.  If you're searching for it on Amazon and not using the link, make sure to remember to use my middle initial H or you might find it.